‘No Thankful Village’ to be screened 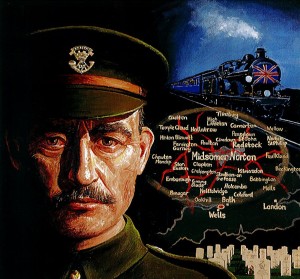 The Midsomer Norton Community Cinema have announced this week that they will be providing an opportunity to see No Thankful Village for the first time in 11 years. Three screenings of the recording from 2003 called Till The Boys Come Home are being arranged on Friday 29th and Saturday 30th August at  7.30pm and on Sunday 31st at 5pm in the Town Hall Assembly Room.

Over 1000 people came to the original performances, based on Chris Howell’s book of the same name in December 2003. Thankfully it was filmed at the time so that local people can have an opportunity to see it again today. The only other time the recording has been aired was last year at the Watershed in Bristol.

It was in the 1980’s that Chris Howell began interviewing men and women who had lived through the awful period of the Great War – which then produced the content for his book ‘No Thankful Village. The eventual cast of the play produced at Somervale School numbered 70 and was largely made up of local people. The script of the play was written by Colin Thomas and the filmed episodes were produced by Lee Cox, who’s company have provided the recordings for screening.

At the end of the Great War there were thirty so-called ‘Thankful Villages’ in the whole of Great Britain; villages to which all the young men who went to war returned alive (though most came back with scarred bodies, stumped limbs, or stunned minds). Remarkably; a quarter of those villages were in Somerset, but amongst the two dozen or so communities around Midsomer Norton, there was no thankful village.

“I’m chuffed that the Community Cinema is going ahead with these screenings – particularly as it’s about Midsomer Norton people and has such meaning for our community as we reflect on the 100th anniversary”, said Chris Howell.

The play is a small tribute from the members of the community in 2003 to their forbears who experienced such horrors and those 330 men commemorated on the memorials within three miles of Midsomer Norton.

For further information and tickets please visit www.midsomernortoncommunitytrust.co.uk/nothankfulvillage or ring 01761 419133. Due to the strong demand expected for the limited places, tickets will be on sale in advance with any remaining on sale on the door on the night.