To celebrate 50 years since the Summer of Love and The Beatles’ seminal album ‘Sgt Pepper’s Lonely Hearts Club Band’, Midsomer Norton will host its very own celebration of The Fab Four over the weekend of the 7th and 8th October. The weekend will consist of three special events at Midsomer Norton Town Hall to celebrate the legacy of Britain’s greatest musical export. 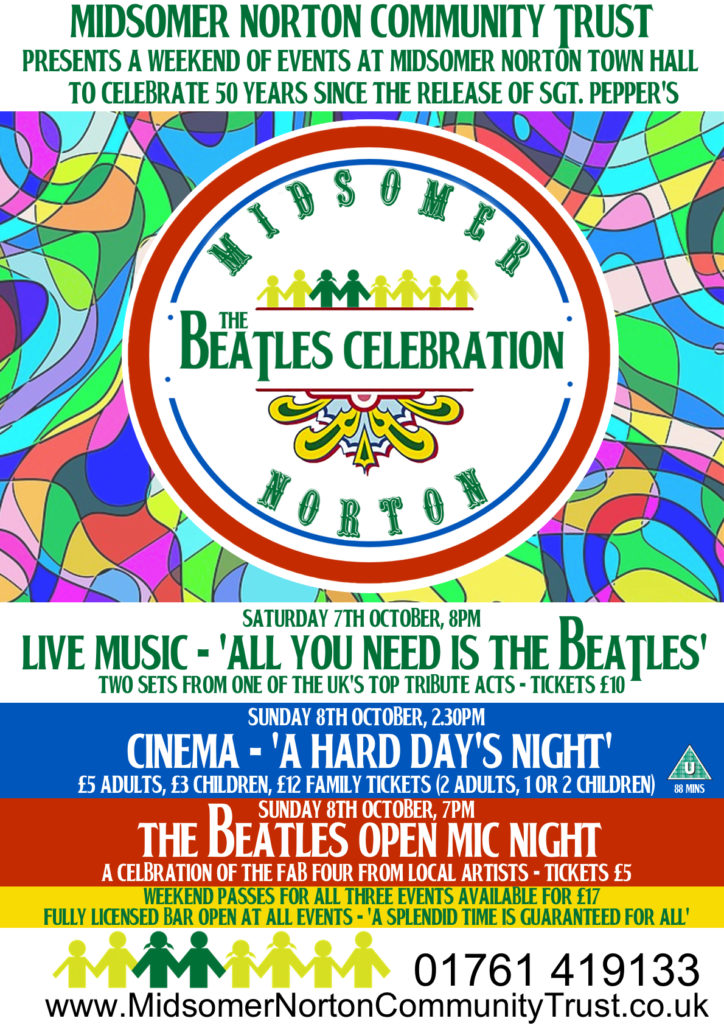 The weekend will kick off with a must-see performance from All You Need Is The Beatles on Saturday 7th October from 8pm. The area’s premier tribute band will faithfully perform two sets of the most beloved songs from the Fab Four’s back catalogue. The first set will consist of songs from of the 1962-1966, the early part of their career and the era of Beatlemania in which they performed to hysterical crowds across the globe. This will be followed by a second set featuring hits from 1967-1970, covering the ground-breaking studio albums Sgt Peppers, Let it Be and Abbey Road. All of the Fab Four’s greatest songs are faithfully recreated live in the original keys, utilising authentic equipment and costumes.

On Sunday 8th October there will be a matinee film screening of the classic comedy A Hard Day’s Night at 2.30pm. The year is 1964 and four young lads from Liverpool are about to change the world – if only the madcap world will let them out of their hotel room. Richard Lester’s boldly contemporary rock n’ roll comedy unleashes the fledgling Beatles into a maelstrom of screaming fans, paranoid producers, rabid press and troublesome family members, and reveals the secret of their survival and success: an insatiable lust for mischief and a life-affirming addiction to joy. The film screening take advantage of the Town Hall’s HD cinema projection and full Digital Surround Sound System.

To round the weekend off, there will then be a The Beatles themed Open Mic Night in the evening from 7pm. This showcase for local talent will offer artists the opportunity perform their own takes on The Beatles and celebrate the legacy the band still have upon musicians today.